Would you like to switch to the accessible version of this site?

Don't need the accessible version of this site?

Your Gut is Directly Connected to Your Brain, By a Newly Discovered Neuron Circuit 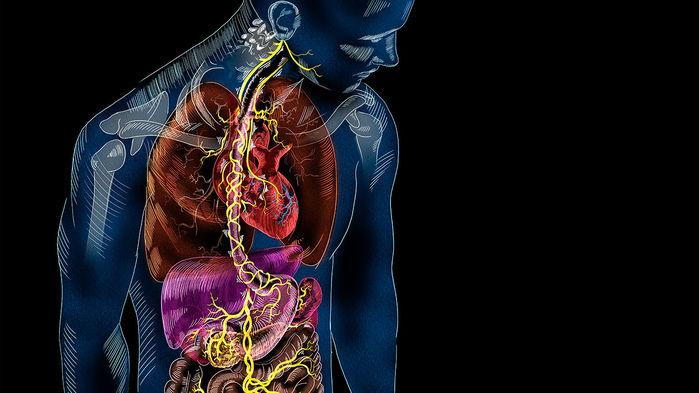 The human gut is lined with more than 100 million nerve cells—it’s practically a brain unto itself. And indeed, the gut actually talks to the brain, releasing hormones into the bloodstream that, over the course of about 10 minutes, tell us how hungry it is, or that we shouldn’t have eaten an entire pizza.

But a new study reveals the gut has a much more direct connection to the brain through a neural circuit that allows it to transmit signals in mere seconds. The findings could lead to new treatments for obesity, eating disorders, and even depression and autism—all of which have been linked to a malfunctioning gut.

The study reveals “a new set of pathways that use gut cells to rapidly communicate with … the brain stem,” says Daniel Drucker, a clinician-scientist who studies gut disorders at the Lunenfeld-Tanenbaum Research Institute in Toronto, Canada, who was not involved with the work. Although many questions remain before the clinical implications become clear, he says, “This is a cool new piece of the puzzle.”

In 2010, neuroscientist Diego Bohórquez of Duke University in Durham, North Carolina, made a startling discovery while looking through his electron microscope. Enteroendocrine cells, which stud the lining of the gut and produce hormones that spur digestion and suppress hunger, had footlike protrusions that resemble the synapses neurons use to communicate with each other. Bohórquez knew the enteroendocrine cells could send hormonal messages to the central nervous system, but he also wondered whether they could “talk” to the brain using electrical signals, the way that neurons do. If so, they would have to send the signals through the vagus nerve, which travels from the gut to the brain stem.

Find us on the map